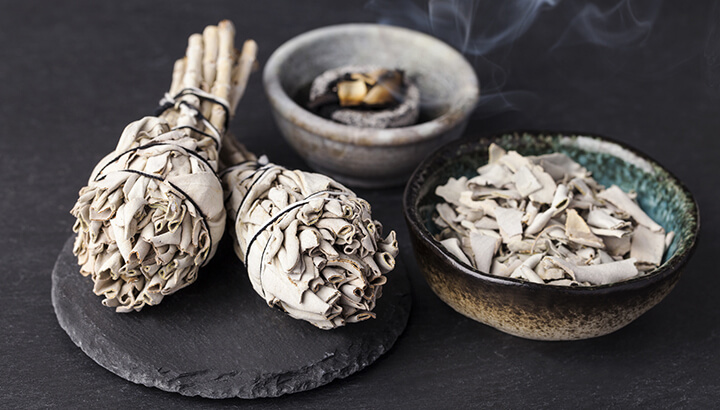 Sacred smoke rituals are among the oldest human practices, dating back thousands of years in some cases. One of my favorite ways to clear my space is by smudging with sage. I’ve always felt better after smudging, but didn’t know why, beyond the delightful smell and the intention behind the practice. It turns out there’s plenty of science to back up the effects many of us have felt for years.

The use of incense and smoking herbs can be traced back to ancient Egypt and the Babylonians. A tablet found on the Sphinx in Giza, Egypt, dating back to around 1530 BCE mentions the use of incense in religious ceremonies. The Babylonian practice of using incense during prayers traveled to Israel in the 5th century BCE. Ancient Greeks, Romans and Indians also used incense, and even the Bible mentions that frankincense and myrrh were brought to the infant Jesus when the wise men visited him.

Smudging as we practice it today — with a bundle of sage and other herbs — is a variation of the Native American practice of “Sacred Smoke Bowl Blessing.” This cleansing tradition varies depending on the tribe, but is generally used for cleansing a person, object or place. Sage is most often used in the smudging work, and it’s believed that the smoke attracts negative energy and takes it away from the person, object or space being cleansed.

A paper titled “Medicinal Smokes” published in the Journal of Ethnopharmacology in 2006 traced the use of smoke for medicinal purposes over 50 countries and five continents. For centuries, smoke has been used to aid in lung, skin and brain function — although caution should be used when inhaling any type of smoke; for a time, tobacco was thought to be healthy. The paper also outlined the other historical uses of medicinal smoke, from its use as a preservative to a pest repellant, and even as a social activity.

Smudging can act as an air purifier

In the same study, the authors found evidence that passive fumes in smoke act as an air purifier. As the authors point out, smoke-based remedies are more efficiently absorbed by the body than other remedies and are delivered rapidly to the brain. This means that anything smoke-based can have a very quick and powerful effect on the brain and body. The implication is that smudging can efficiently clear the air of smells and toxins. In fact, the negative ions that are released when you smudge a space have been found to help fight the influenza virus.

A follow-up paper published in 2007 in the same journal found that smudging can reduce the number of airborne bacteria in a space. One hour of medicinal smoke using a mixture of odoriferous and medicinal herbs resulted in a 94-percent reduction of bacterial counts. In a closed room, the purifying effects lasted for up to 24 hours.

Certain bacteria including Staphylococcus lentus, Corynebacterium urealyticum (a bacterium found in urinary tract infections), Klebsiella mobilis (which can lead to pneumonia, meningitis, septicemia, diarrhea and other infections) were still absent 30 days after medicinal smudging. The authors concluded that they were able to effectively demonstrate smoke’s ability to eliminate “diverse plant and human pathogenic bacteria of the air within confined space.”

Indoor air quality in both developed and undeveloped countries is incredibly unhealthy, with up to 1800 bacterial types floating around in our homes and offices. Many of those bacteria are pathogenic. Outside, the relatively low moisture in the air, a lack of nutrients and high levels of UV light keep most of the pathogens out of our air. The extreme conditions make outside an unsuitable environment for most bacteria. But in more sheltered areas — plant canopies in the jungle, for instance — there are higher levels of bacteria in the air. Inside our buildings, bacteria thrive. It’s warm in our homes, there’s a higher level of humidity and bacteria can hide in dark spaces. Smudging may help neutralize those bacteria.

Smudging can elevate your mood

When you smudge, negative ions are produced, which have significant antidepressant effects. In the 1930s, Dr. Clarence Hansell, a research engineer, found that one of his colleagues experienced a boost to his mood when exposed to the ions that were generated by their equipment. When the machine was on, producing negative ions, his colleague was happier. When it was off, he became sullener. In an extension of Dr. Hansell’s resulting work, a study published in the Archives of General Psychiatry found that people with seasonal affective disorder, or SAD, benefited from negative ions in the air.

Another study found that negative ions also help normalize the levels of serotonin — the feel-good hormone — in the brain. This can help improve your mood.

What herbs to use in smudging

How to smudge your space

Smudging is simple. You’ll need a smudging bundle — sometimes called a smudge stick — a non-flammable dish or the more traditional abalone shell to catch ashes, and a feather or hand-held fan if you wish. The tools you use are certainly important, but of equal importance is your mental state and following a few guidelines.

While smudging, focus on your intent: to clear the space or a person of negative energy. Smudge the top and bottom corners of the room and make sure you keep a door or window open to allow the smoke to dissipate. Use your hand or a feather fan to keep the embers glowing and move the smoke through the space.

If you smudge yourself in the process, do so by fanning swirls of smoke around your body starting at your head and moving down to your feet. Visualize the smoke carrying away any negativity or illness. More traditional smudging rituals involve smudging while facing each cardinal direction individually and speaking certain mantras or prayers.

While smudging is certainly not a substitute for medical or psychiatric care, it can support the care you already receive. How you smudge is up to you, and as long as you follow the guidelines above, there’s no wrong way to do it.

Have you ever smudged your space? Let us know in the comments below!