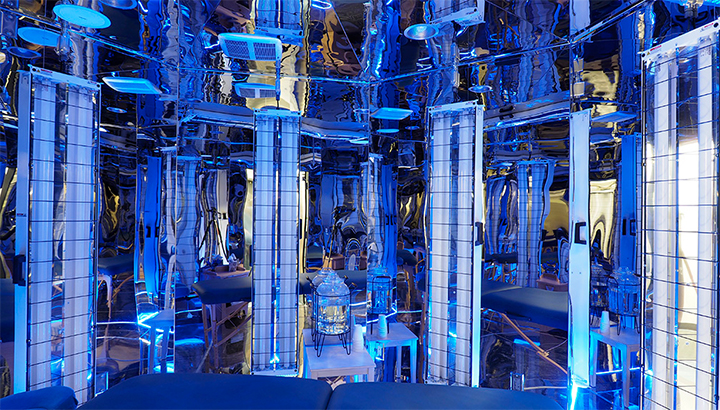 Post-traumatic stress disorder (often referred to simply as PTSD) can severely affect the lives of those who suffer from it. Sadly, this condition affects many people. According to the organization PTSD United, about 24.4 million people in the United States alone suffer from PTSD. Anyone who has experienced a traumatic event is vulnerable to developing this condition, and it is one that often affects active military service members and veterans.

The good news is, there are a number of alternative therapies that may greatly aid sufferers of PTSD. The following are just six of the many that are out there.

The Blu Room, pictured up top, is a new invention that is offering significant relief to individuals with PTSD. At first glance, the Blu Room looks like it belongs in outer space. When individuals step inside this octagon-shaped room, they are surrounded with blue UV-B rays. During each 20-minute session, the user basks in the light waves while listening to soft music and experiencing other relaxation techniques.

While this may sound strange, there are testimonials that it works. According to Dale Vaughn, a veteran of the Vietnam War who has been using the Blu Room since late last year for his PTSD, “It feels like I’m going to a place of peace. You feel healthy and happy.”

Cynthia Williams-Patnoe, who served as a pilot in Afghanistan and suffered a brain injury when she returned home, said, “The Blu Room was very peaceful and therapeutic. My short-term memory was coming back thanks to the sessions.”

If you or someone you know wants to give Blu Room therapy a try, there are currently two in the United States, both in the state of Washington. However, more are scheduled to open soon. There are also Blu Rooms in various countries across the globe, including Austria, Canada, Germany, Ecuador, Italy, Japan and Switzerland.

One practice that can have a profoundly positive effect on PTSD (and many other conditions) is meditation. It makes sense — meditation trains the mind to center in the present moment, and to let go thoughts of the past and future. This process is incredibly soothing and able to engineer deep inner peace.

For just one piece of evidence, a 2016 study published in the journal AMSUS Military Medicine investigated the effect of Transcendental Meditation® on active military members with either PTSD or anxiety. Results found that after the study period, nearly 84 percent of the individuals who practiced the meditation either reduced or stopped taking psychotropic medication for their PTSD symptoms.

In the Florida Keys there is a wonderful initiative called the Dolphin Research Center, which has hosted veterans from the Wounded Warrior Project. According to Armando Rodriguez, the co-founder of the center who is also a Vietnam veteran, swimming with dolphins can help veterans find relief from various injuries, including PTSD.

On the impact of the Dolphin Research Center for veterans, Rodriguez stated, “Every animal is magic and they accept you for who you are. That’s a big deal for us warriors. Look, every wound is not a physical wound. There are a lot of wounds that can’t be seen, and that’s where the dolphins come in.”

Medical marijuana may ease symptoms of PTSD for some sufferers. There is currently research planned to study the effects of marijuana on veterans with PTSD, although there have been some delays in the process. However, anecdotal evidence is significant. Some veterans, including the organization Veterans for Medical Marijuana, stand behind this treatment, saying it aids in improving quality of life.

Research has found that psilocybin, the active ingredient in “magic” mushrooms, may help to ease depression and anxiety. This potent natural substance may have potential for PTSD, as well, according to Roland Griffiths of Johns Hopkins University. More research needs to be done, but the potential is definitely there, as psilocybin has been shown to alter consciousness in a way that can lead to long-lasting changes in perspective.

Another psychedelic substance which may have a notable capacity to heal is LSD, commonly known as acid. This is another substance studied by Roland Griffiths, who states the psychedelic substances can foster great change in individuals, and may help ameliorate psychological conditions such as PTSD, addiction, depression and more.

If you or someone you love is afflicted with PTSD, it may be worth your while to give some of these alternative therapies a closer look. In the case of magic mushrooms and LSD, it is, of course, illegal to just go out and buy some, but be on the lookout for legitimate research studies in your area. In a few years, these sorts of therapies may be much more accepted than they are today.