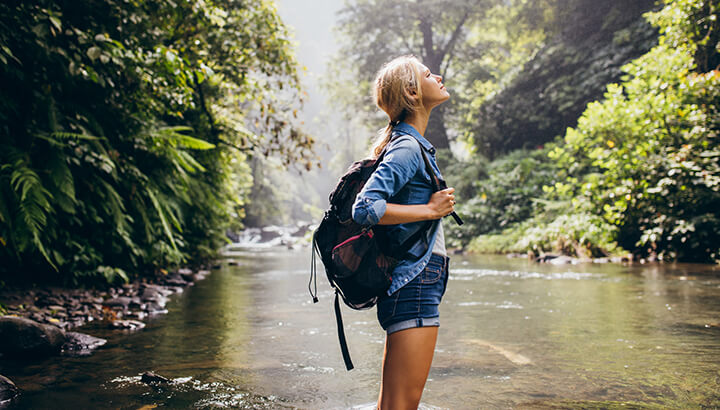 We’re often told to get outside, away from our computers and the fluorescent lights at the office. There’s ample research to suggest that it’s good for us, but according to a new study, being outside might unexpectedly change the brain.

According to new research published in the journal Brain Research, it seems our brain has to work harder when we’re outside under certain circumstances. In the study, 12 participants were asked to listen to a series of tones – once inside a dimly-lit, quiet lab room and once while riding a bike outside near a street. The findings of the study suggest that people had a harder time responding to the tones while riding a bike outside. In fact, calming brain waves — those observed when a person is meditating or sleeping — practically disappeared when the subjects cycled through an urban area.

When we are outside, “there are traffic sounds, and the sights of traffic, and all these people around you, and trees and birds and the wind and the cold,” lead author and assistant professor of psychology at the University of Alberta, Kyle Mathewson said. “All these extra sensations are kind of competing with the task that you’re doing,” which in turn forces the brain to work harder at any given task.

The benefits of being outside vary with your activity

This is not to say that being outside is bad for you, and in fact, there are many factors involved in the study that should make you pause. For one, the two environments were drastically different. The research team did not, for instance, measure brain activity in a quiet lab versus a walking path in the park.

People who rode a stationary bike indoors and responded to auditory tones in a previous study conducted by Mathewson did not show much difference between the sedentary group and the biking group. So, that rules out biking as the likely cause of distraction. Secondly, in a follow-up experiment, the team also found that the simple introduction to the outside world did not cause a distraction. When subjects listened to recorded traffic sounds inside the lab, they experienced reduced brain activity similar to the group who rode the bike outdoors.

Finally, the study does not take into consideration the added stress of being a cyclist in an urban environment. Vehicles, pedestrians, and other obstacles demand our attention when we ride a bike in the city because they present a potential danger to our safety.

Scores of research suggests that being outside is beneficial to both your body and brain. We’ve broken those studies down for you.

1. Being outside helps you feel restored

A 2014 study from Finland found that people who spent just 15 minutes sitting outside, either in a park or a forest, experienced a feeling of restoration. A short walk increased these feelings, suggesting that the stress centers of the brain settle and down-regulate when we get outside even for short periods of time.

In the same study, people felt more vital after 45 minutes of strolling or sitting in nature. Those who did so in a park or forest — as opposed to an urban setting — felt 20 percent better than those in the city.

3. Walking outside boosts your attention

In almost direct opposition to the new study from the University of Alberta, a Stanford University study found that 50 minutes of walking in a city park not only improved people’s mood, but also boosted their working memory and attention. The team also found that 90 minutes of walking changed the brain for the better and may help fight depression.

A 2015 study published in the Proceedings of the National Academy of Sciences found that the simple change of walking in a park, as opposed to walking along a city street, reduced the blood flow to the subgenual prefrontal cortex. This part of the brain is associated with negative thought patterns, suggesting that the outdoors helps rewire the brain for more positive thoughts.

5. Nature can boost your creativity

A four-day long hike in the wilderness might be the key to boosting your creativity. A study published in 2012 suggests that those who went on such a hike — without access to technology — scored 50 percent higher on a problem solving and creativity test than subjects who did not.

The fewer distractions, the more benefits there are to being outside. So, leave your phone at home and get outdoors in a local park or take a camping trip to a place where reception is minimal. Tuning into nature — and getting away from the traffic of the big city — seems to be the key to changing your brain for the better.

What’s your favorite way to spend time in nature?